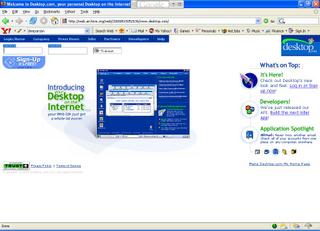 Those were the days! I didn't own a computer, still don't. Year 2000 will go down in history as the year when people exhibited their stupid ideas with unbridled enthusiasm. Desktop.com was the offspring of one such crazy idea. A virtual desktop was created over the Net which could be accessed through any browser. I must concede the product was a stunner to look at! It looked almost exactly like a real desktop with its own taskbar, screen icons, mail client and even a browser!
I was so addicted to it that everynight I would visit a cybercafe and surf the Net only via Desktop.com. I was proud of flaunting my 'environment' to all and sundry. However, the dotcom bust had just began and I got to know of something called 'revenue model', something entirely alien to my beloved site! Suddenly, it became an endangered species and I began to count its days.
Sure enough, the dreadful day did come. It was the 24th of December, 2000. BTW, the dotcom bust had obliterated so many sites in its wake that at least one special site named F**kedcompany.com came into being just to help speculate the downfall of other sites. Desktop.com did find a mention there. Their witty observation about it (something to the effect of Desktop employees closing shop for an early Christmas!) was lacerative. Hey, most scientists ridicule the Steady State theory. I take heart in that!