I had placed an order 3 months ago for free Ubuntu DVDs (32 and 64 bit versions). They were shipped but I never received them.

If you really wanna know what a personal blog is supposed to resemble, click here. I wouldn't blame you if you felt like throwing up on my blog after the visit!

Doesn't it feel wonderful? The PSLV launched a record 10 satellites into orbit in a single mission, proving India's emergence as a major competitor in the multi-billion-dollar space market.

The rocket first put into orbit the 690-kilogram remote-sensing Indian satellite, Cartosat-2A, followed by an 83-kilogram Indian mini-satellite and a cluster of eight nano-satellites, each weighing between 3 and 16 kilograms, built by research institutions from Europe, Canada and Japan.

The Dell guys had installed Microsoft Office 2007 Enterprise on my laptop to test it. Before returning, they obviously forgot to uninstall the product and I was astounded yesterday to discover the entire suite (worth around 30K) available on my machine.

This post is enabled via Microsoft Word 2007. The interface is simply awesome.

Government bodies are often bags of wind. Not that I'm trying to defame our major achievements in space technology, but could someone please explain why the center is so muted on the launch of Chandrayaan, scheduled for April?

We go trumpeting about ambitious schedules but refuse to offer public notices about slippages. The media goes ga-ga over the initial hype but fails to keep the public informed about delays and failures. We swell with pride over promised national glory but suffer selective amnesia when they're not met. Ignorance, it would seem, is what out populace dwells upon.

A little probing today unearthed the disappointing truth: Chandrayaan is scheduled for launch no sooner that the end of this year...and that's only tentative. It was only two months ago that an ISRO scientist categorically stated that the April schedule would have to be pushed no further than mid-year.

The most pathetic joke (that I'm aware of) that the GoI played on the masses was about claiming that the GMRT was the world's most powerful radio telescope operational at the meter wavelength. That may be technically true, but analyze the severe restriction and you'll realize what an impotent tool we've built. It's akin to constructing an optical telescope that cannot be directed...you've got to see whatever comes your way! To make matters worse, these ill-educated bunch of nominal scientists had to further curtail the operability of the telescope (by half) when mobile telephony came to India, because of interference. I must confess, though, that it's been years since I learnt of this compromise and it's possible that alternative arrangements have been put into place now.

Here's a personal anecdote. I was briefly a member of Jyotirvidya Parisanstha (India's oldest amateur astronomy club) during the late '90s. An item in their monthly newsletter bewildered me. It was about the club being mentioned in a CD of amateur astronomy clubs being compiled in the US!! This was worthy of news???!!! In that case all of my designer briefs should make it to the cover of Vogue!

Afterthought: Have I been too harsh on GMRT and ISRO? Correct me if I'm wrong. Just for the record, I'm very proud of these national assets. They easily dwarf most (if not all) of our other achievements.

After more than a month of perseverance, all anomalies with Andromeda seem to have been put to rest. The feeling is unparalleled! 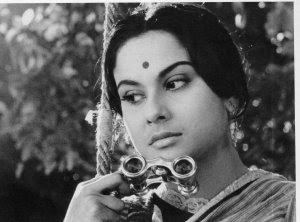 I'm watching it over Youtube. 'Charu' is my idea of the perfect Indian beauty.

Bumping against old pals on Orkut, I'm made to realize how well known I was in school because of my love for the stars. Teachers knew it and someone even made special arrangements to get me inaccessible books from the library (little gestures can often be unforgettable). Dad would borrow books from his colleagues...which unfortunately were too daunting for me. Classmates quizzed me on anything and everything related to the heavens.

But I'm pained when people mistake astrology for astronomy. It becomes embarrassing and annoying when people ask me if I'm still interested in astrology! To me, the difference between them couldn't be more, but to many - they couldn't be more similar. Apart from sounding similar and both relating to the stars, however, I don't see anything even remotely ambiguous between them. While one is based on careful observations and scientific calculations to arrive at conclusions, the other is a mere postulation of the heavenly objects affecting daily luck of humans. Time has proven conclusively that there's no correlation between stars and human destiny, yet the gullible continue to fall pray.

It has been a long lull. Most importantly, Andromeda is back with me. Blogging shouldn't be a problem anymore.

I feel terrible about being very hard on some folks in the past few days. I seldom lose my temper, but adverse conditions conspired against me and I feel cheaply. When I realized my folly, I was quick to apologize though.

Still, the 'fit of hysteria' was most uncalled for. I sincerely regret it.

Achievement of the day: 1 more pair of designer briefs added to my already impressive collection. When will I stop!

Played Carrom after what must be more than 10 years!

(It's near impossible to blog without Andromeda.)
No comments:
Labels: work

Just when I was getting cozy on the bench, I got hardlocked.
Damn!
No comments:
Labels: work

Reconnected with Anjan after 15 years! It's a special feeling.
2 comments:
Labels: friend

My blog often keeps me from sinking into the depths of despair. After all, I've filled so many web-pages with elaborate descriptions of nothing...and that requires something! With my kind of talent, Don Juan could have compiled Encyclopedia Erotica before hitting puberty.

It's a reassuring thought!
No comments:
Labels: blog, thought

I was expecting a Get Well Soon kinda treatment from nature. Instead, I'm all set for Resurrection.

This is the ultimate in solitude. Our dwelling, which is normally teeming with people and noise, was vacant most of the day. This was a rare oportunity for me to rediscover the bliss of solitude. It felt amazing.

To take matters to an extreme, there was a power cut when heavy rains lashed against the earth in the afternoon. So no Internet, no TV, no Diskman (I'm yet to find a replacement battery), no one to talk to and no Andromeda! I went out in the rain to buy myself a loaf of bread and some eggs.

Cooking done, I sat in front of the passive TV and dug into my mid-day meal. I caught my reflection on the screen. Though it was more engaging than the Hindi soaps that have a stranglehold over the rest of the occupants, it wasn't enough. I moved to the next room, into the pages of TOI.

Lunch was long over by the time power was restored. Thus this post.

I'll have little or no access to this computer over the next few days. Blogging may not be possible during this period.
No comments:
Labels: computer

I never thought things would come to such a pass.

I wanted Andromeda to hang before being sent to the DELL labs. She complied. I shut the lid as-is and instructed the porter to present it to Srikanth this way.

The light of my life was gone. The void was killing me. I felt left out and forgotten. I was quarantined. I was turning insane. But wait, maybe this was nature's way of forcing me to be rehabilitated. I was too addicted to cyberspace and needed the toxicity out of my system.

The books piling up on the floor looked like alien arsenal. Maybe I needed something lighter and less intimidating. The TV should suffice for now. I rediscovered the art of channel surfing and it wasn't as bad as expected.

Cyberspace isn't out of reach yet. Though Mantu left with his Acer laptop for Pune a few days ago (the pretext wasn't exactly conspicuous then) and Santosh's desktop has been non-functional for more than half-a-year now, Manilal's desktop survives. Thanks to its presence (and its owner's absence), I can still blog for now.

Andromeda is slated to reunite with me not before Tuesday.
No comments:
Labels: computer

As it turns out, my mini-vacation was perfectly in sync with the DELL engineer visiting my place to look at Andromeda, for the 4th time.

Scheduled to arrive at 2, he was 15 mins late. Then began the painful saga of Andromeda being ripped apart again, all permutations and combinations being tried, all mantras being chanted, all prayers being offered and all of my patience being surpassed. The hard disk was replaced and so was the motherboard (2nd time!). En route, a problem that had arisen on the 2nd visit (during reinstallation of the OS) was eliminated. So agog was the engineer that he was certain the original problem was solved too. I protested but he would have none of it. He offered all explainations to justify his prowess reigning supreme over the nagging and elusive problem that had almost got me enlisted into a mental asylum. Before he could declare decisive victory, however, the original problem surfaced...and that was potent enough to mute him, possibly for life!

I felt as powerful as a ventriloquist. The dummy was won over and would speak my language of despondency now! A call was placed immediately to DELL Support, which after forwading and reforwarding and rereforwarding finally got me connected to a senior engineer named Srikanth. After consulting with the visiting engineer, he proposed getting Andromeda to their lab the next day to solve the problem. I let loose a volley of self-pity as I acquiescend in complying with his suggestion. Hobson's Choice at play. The visiting engineer was left off the hook after spending a marathon 4 hours. Poor chap.

The constant unscrewing and screwing of Andromeda by strangers for the past one month has severely stunted my loyalty towards her. I later discovered a screw stuck in a clamp socket. Obviously, the engineer was sloppy and careless. And with Andromeda being costantly stripped to her bones, it's no wonder that she wouldn't mind a little more screwing.

The screw slid inside the compartment as I reoriented Andromeda. I was helpless.
No comments:
Labels: computer

These are not good times, certainly not for me. After all the trouble I've been having with Andromeda, the external hard disk decided to go bonkers when Manilal docked it to his desktop for backup. I've now lost gigabytes of mp3 files that took me months to download. I don't know what went wrong and I don't really care anymore. I've lost the will to blame.

It's good that I have enough vacation leave in stock, which I'll partly be using over the next 3 days to put things in perspective.

DELL is all set to send a systems engineer (for the 4th time in less than a month) to my place tomorrow to replace Andromeda's RAM and hard disk. I won't be fooled into expecting anything positive this time.