Ever since Faust made his pact with the Devil, many have longed for things they could would willingly trade their souls for. The Holy Grail would have worked, but nobody could find it. The Philosopher's Stone was a contender, but gold lost its shine. Marijuana had promise, but couldn't make it past the sixties. Trendy dotcoms that served free latte to employees came close, but didn't last long enough.

The lost tribes of the information age needn't despair anymore. Move over Faust, Google is here. An account with Google's email service, Gmail, with its 1 GB of storage, fantastic search facilities and innovative storage options is something every Net user has been dying to get his hands on. Till now only a chosen few have been invited to sign on. But they, in turn, can invite three more to sign up. So high is the demand for these invites that a whole marketplace has come up around it. Sean, a Canadian, has started a website, www.gmail-swap.com, which lets people without Google invites offer money, love or prayers in return for a mail invite. People have been offering boat rides in Venetian canals, a note slipped through the Holy Wall in Jerusalem, an original piano composition, a chance to work on a genome project - all for the Google invite. Some have taken the capitalist ground, listing the invite on eBay. The bids have ranged between $34.99 and $60. But there is one poor, jaded student, an atheist, who says if someone offers him the invite, he would start believing in God. Does the Pope have any invites left?

Guess what? I have a Gmail account!!!
It's spartan but fabulous!
No comments:

This must be one of the best movies of all time. It made me cry.
No comments:

Venus transit against the backdrop of the Sun 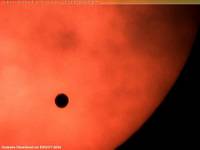