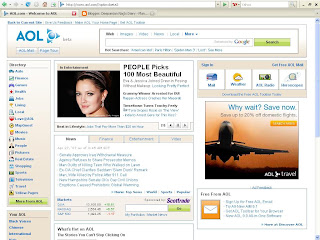 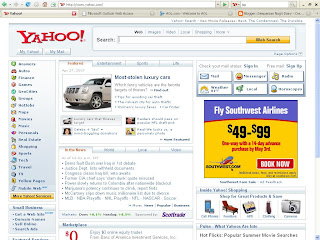 If imitation is the sincerest form of flattery, Yahoo! must be mighty flattered. The redoubtable AOL has released a Beta of its homepage that looks remarkably similar to Yahoo's.
No comments:
Labels: Internet

The Problem with Newsreaders

Don't get me wrong, I am one of the innumerable converts who have taken to reading news and blogs via newsreaders instead of jumping from URL to URL. Navigation is uniform across all site-feeds and the convenience is too much to be ignored.

But after using some of the best newsreaders (both desktop and web-based), I've come to realize there's at least one critical flaw that's innate to all of them: the lack of hierarchy in news presentation. All news items get the same amount of coverage irrespective of how vital or trivial the issue might be. So India launching a foreign satellite for the first time is only as important as an unknown girl eloping with an equally unknown boy when viewed through a newsreader!

The other flaw, those less critical, is the problem of redundancy. When you read news from multiple sources, you often come across the same issue being covered by more than one. Although the same problem persists if you prefer URL-hopping, a better alternative is to stick to one site that covers it all. And if you indeed rely on a particular site for most of your news cravings, a newsreader would make little sense except for subscribing to the lesser or more specialized sites and blogs.

Here's my pattern. I rely heavily on Yahoo! News (the most trafficked news site on the Net). The labor pains are too much for me to individually visit the other news sites (mostly science, technology and editorial) and blogs. So I read them through Google Reader or My Yahoo. These two readers have vastly different approaches to newsreading and I guess the perfect reader would have to a hybrid of the two, disparate though their approaches may seem!
5 comments:
Labels: blog

Okay, everyone who has had the ill-luck of coming across my blog and subsequently being subjected to its mass-produced trash is well aware of the typos that infest most of my posts. But my previous post has definitely set a new record with its utterly crappy literature and typos. I never revise my posts before publishing and I seldom go through my posts post publishing. I guess that's the culprit.

I hope to be more scrupulous from now on.
No comments:
Labels: blog

A lot transpired over the past one week. I could have blogged on and on about them but...Blogger.com was blocked from my previous workstation and my short-term memory wouldn't last long enough. To make matters worse, I didn't (and still don't) have access to the Net from home either. Despondency had hit a peak.

There was a high-profile showdown on Friday and I was the victor. I also planned to get Net connection on my mobile but the Hutch executive mislead me by saying that my phone didn't support XHTML. I gave up when he insisted that he was sure of it even though I remained skeptical. My feature-rich phone letting me down?!! No way! This was too much of an insult. I came home to consult the manual only to learn that I was indeed right. I felt like banging the head of the executive. Will do it next month when I revisit the shop to apply for the connection.

I've been a Hotmail devotee ever since I started using the Net 9 years ago. But my loyalty to Yahoo! cannot be equalled by anything, not even Google or Hotmail. Perhaps the only useful Yahoo! product I've not used in the last 6 years is its Mail. Things changed on Thursday when I switched to Yahoo! Mail Premium. The interface is a stunner and you get disposable mail addresses, just what I've always wanted. Though relinquishing Hotmail may be impossible since I've subscribed to too many services through it, I hope to gradually migrate to Yahoo! Mail in the coming months.
6 comments:
Labels: blog, computer, work

We have a regional calendar according to which today marked the first day of the new year for the bengalis and probably a few other communities. SMSes exchanged in the morning made me aware of the special day.

Mani was scheduled to take his computer away (sigh!) and I was racing against time to complete the Frank Sinatra and Keith Jarrett downloads. To make matters slightly more complicated, the computer's CD writer wasn't working. Reddy came to my rescue a couple of days ago and lent me his 40GB external hard disk to transfer my 3.7GB downloads.

I halted the downloading in the afternoon when Mani came on his evil mission to whisk away his PC! Jarrett's downloads were over by then but Sinatra remained incomplete. Well, I can't complain. Possibly, the only good thing to have come of Mani's visit was Santosh finally visiting my dwelling after many months. It was great talking to him and I still wish my roommate of 3.5 years (not in 1 stretch) could come back.

Mani left with his computer in the evening while Santosh remained for a few more hours on my insistence. Sam visited us and the three of us had some lively discussions about life and love. Sam doesn't believe in the Theory of Evolution and the Big Bang Theory! It's nice when 3 people with different beliefs can discuss their differences amicably. The evening turned out to be very interesting for us.

I feel sad each time I look at the table and find the computer missing. I was supposed to buy a laptop by the 1st week of May but the plan has been shelved for now.
No comments:
Labels: computer, friend

A first: I have a headache...a really bad one.

I wanted to write something on falling sick (I've fallen into one today after many years today!) since long. Now that the condition is authentic, I'll too sick to write! Maybe I can pile up the memories by this weekend and commit them all to my blog. But that's only if lethargy and a hurting head don't get the better of me.
2 comments:
Labels: blog, memory


This happens to be the best selling jazz album of all time. Listen to one of the tracks (Flamenco Sketches) and discover why jazz is often called America's classical music.
2 comments:
Labels: music

After so many years!

Bought a book on Servlets and a 5-issue compilation of Amar Chitra Katha titles on Birbal! It's been so many years since I last laid my hands on Amar Chitra Katha, a magazine I used to voraciously read as a child. Many a plead to Dad to accompany him to the market was inspired by the prospect of finding a new issue of the magazine which appeared fortnightly (although I wouldn't count the passing days). And when the issue did surface, there was only one thing to do: buy it!

The fun hasn't diminished one bit in all these years, although that special feeling is gone. Dad's no more and I need not wait for a fortnight to buy the new issues since a huge archive is now available at Landmark. Still, there was more fun in the fortnightly wait and mounting suspense.

One issue I waited for a long time but never found was The Gita. The friendly competition that a friend and I used to have over the number of issues bought was implicitly a race towards possessing this untimate issue...and it evaded us till the very end. At last, I did discover it today! Alas, it wasn't in English!

I intend to build an archive of these evergreen issues of Amar Chitra Katha in the months and years ahead. And I'll be as fiercely possessive of them as I ever was. But I'll miss Dad's inimitable narration this time.
No comments:
Labels: memory
Newer Posts Older Posts Home
Subscribe to: Posts (Atom)