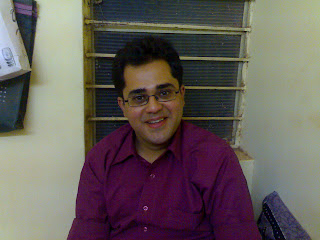 Eagerly waiting for this one.
No comments:
Labels: astronomy

The traffic is pushing me to the brink of dementia. We took 40 minutes to cover less than half-a-kilometre.

An insole is the culprit for giving me a severe limp. Things changed from bad to worse as the day progressed and now (@ home) I'm almost completely immobile. The pain in my left foot is stabbing.

A screw from my frame decided to unscrew and that's how I became frameless and unfocussed post noon. After work, I limped to a newly opened (I guess) optician's store and the kind boy repaired it without charging a dime.

A belated and lonesome lunch was going okay until it was time for the wash basin. I began to bleed from the nose, possible because of the heat outside.

If time is nature's way of keeping things from happening all at once, troubles are indeed timeless!

The week that was

The good thing about weekly chronicles is that you are better equipped to stuff your post. The bad thing, if you're me, is that it's back to square one since your memory begins to fade beyond the realm of a few hours. So keeping this handicap in mind, here's a partial recall.

Work danced like a demon over my head for the first 4 weekdays. My first lunch of the week happened on Friday. An acquaintance from Dubai came to India and sprang a huge surprise on me. I managed to copy an assortment of English movies to my laptop. Andromeda has a problem with prolonged read/write requests to the external disk, this may be because the disk isn't certified for Vista. Still, the glitch has me worried. There was a mini-bookfair organised in our cafeteria and I decided to veer clear of literary stuff, since I'm excruciatingly slow on them. I bought a title on EJB instead.

Life is getting immeasurably complex. The responsibility of taking critical decisions that could have a heavy bearing on me and others is overwhelming. It just doesn't seem fair.

This was the longest I've ever stayed away from Andromeda, except for a sojourn late last year. My last rendezvous before now was way back on Sunday.

On a different note, it's a very warm feeling when strangers visit my blog to post sweet memories from the distant past and I'm constantly amazed at how touching such accounts can be.

People have a lot more in common than is readily visible.

A very offbeat day. People kept calling, people kept coming, the martinet kept complaining that I was busy socializing (a first in life!), I mutilated a piece of Java code to the point of no return, was informed that a cousin became a proud mother on the 18th, wished Anand's sister on her marriage anniversary and marked an anniversary of parting ways with someone.

Best of all, today was Dad's birthday. Miss you, Dad!
No comments:
Labels: computer, friend, relative

Even the cafeteria serves stale food

A burger that had outlived its shelf life is responsible for upsetting my tummy. I had a restless night and every visit to the office restroom today resulted in loud explosions from my bottom! The heavy workload didn't help one bit.
No comments:
Labels: work

If I could, I would!

One of those days

Today was just one of those days you have at your disposal to simply waste away, not that your luxury can be taken at face value.

A strap from my slippers decided to snap away, as has often happened in the past, and I had to venture out for a replacement. Well, I would have to go out anyway to keep an appointment, and I saddled my outing with an attempt to buy a replacement battery for my portable Diskman from Vivek's (an authorized retail store for Sony accessories). The salesman shook his head unhelpfully (so typical), I was disappointed but not surprised.

The BATA outlet doesn't stock straps for slippers, unlike their counterparts in Jamshedpur or Kolkata. I guess people in the high-tech city have risen so high up the economic chain that they can afford to waste more and care less about the lesser things. Oh yeah, before reaching for the retail store, I had even consulted a roadside cobbler if he had straps in stock, an idea I communicated with great difficulty and iterative gestures. One mantra I've learned in Karnataka: when you need to get an idea across to a less fortunate native (and sometimes even a fortunate one), assume he's deaf and dumb. It makes life that much simpler.

I had to settle for a new pair of slippers.

I'm proud of washing a lot of clothes today, a feat that I don't achieve too often on weekends, forget weekdays! And though my chances of controlling the TV are usually remote, the remote was in my control for a substantial part of the evening, an opportunity that let me rediscover an Alicia Silverstone  flick (for the nth time). Somehow, she always reminds me of the Israeli girl I  made friends with while returning from New Delhi to Howrah in 2002. What a stunner she was!!

I also discovered to my dismay, that cockroaches had nibbled away much of the rubber insulation to my Sony earphones, precariously exposing the inner wire. It's only a matter of time before...

That's how a day in my life was perfectly wasted. Here's hoping there'll be many more! Despite suffering a very tumultuous present, Yahoo! is regularly coming up with fantastic technology mash-ups.  Try NEWSGLOBE to know what I'm talking about. Try finding directions in Yahoo! India Maps and you might be surprised at the great detail the result page throws at you, although I'm not sure if the suggested routes are optimal. Yahoo! Video now sports a sleek new look and protects user privacy much better. I had previously sent a very harsh mail to the video team for its shockingly shoddy job in this regard. Seems they've learnt a lesson not to take user details lightly.

Why the hell do some people have to screw up their lives when they are at the very onset of their careers? What could be the inescapable allure of getting drunk each night and then surreptitiously spending time in the terrace, hoping to lessen the foul smell? Who do these people think they're kidding when they concoct the stupidest of excuses for coming home late from work?

I have no pity for such shameless creatures and hope they perish. What a waste of human resource!

Buses in Jamshedpur allowed only ladies to sit on the right of the aisle while the ones towards the left were open to all. The only way to circumvent this restriction was to be seated on the last row, which was gender agnostic. Of course, the driver's seating was also an exception.

I invariably sit on the left to this day.

This was expected, but I reckon Yahoo! is only delaying the inevitable.

Here's what bothers me the most. Yahoo! servers run on FreeBSD, a rock-solid flavour of Unix. Well, Hotmail did too, until Microsoft gobbled it and changed it to Windows. It's another matter that the transition didn't happen overnight. If Microsoft devours Yahoo!, there's little reason to believe that FreeBSD will continue to have a free run. New services will be launched on Windows and old ones, when upgraded, will inch away from FreeBSD.

The Java guys in Yahoo! would feel like an endangered species, mass exodus would ensue and Microsoft would be hard-pressed to replace them. Other employees, disgruntled by the identity crisis, would follow suit.

Of course, this is just one of the possible scenarios and I hope it never happens. I have nothing against Microsoft per se, but I fear Yahoo! wouldn't be Yahoo! anymore if Microsoft owns it. The Redmond giant should begin to embrace the heterogeneity of the Internet before others cut it to size.

Addendum: I met an acquaintance a few days ago who recently switched to Yahoo!.

Something seriously impedes my writing.

On the positive side, the weather's awesome - just what the weekend warrants.

Socks were wet in the morning after the night-wash.

Thought of accelerating the evaporation process with my electric iron.

It did the job. It actually overdid.

My socks turned into paper.

I bought a set of dictionary and encyclopedia a few days ago and laid my hands on the latter on Saturday, the day we suffered an epic 14 hrs without electricity. An offline reference may seem like an anachronism in the 21 century prima facie, and for a few hours after the purchase I was trying hard to convince myself of having made the right decision.

It was vindicated when I flipped through the pages and rediscovered the vintage  joy of reading a glossy reference. What an experience it was...beats the hell out of HTML pages whose chief claim-to-fame must be hyperlinks.

Flipping through pages remains sexy as ever.

We survived over 14 hours at a stretch without electricity yesterday. This is Bangalore, India's high-tech city.

Yahoo! has acknowledged receiving an unsolicited offer from Microsoft to be bought for $44.60 billion.