How Saturday was spent 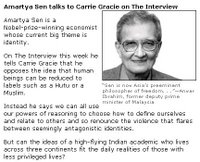 Today was dedicated almost entirely to reading news via Feedreader. Some of the sources were:
Audio news & music streamed into my room courtesy:
Especially nourishing was Amartya Sen's interview on the BBC.

Santosh has shifted his focus from Cyberspace to Mobilespace, partly because I seldom grant him access to his PC! He never gripes, lucky me! His phone is stripped of all bells & whistles, yet Santosh finds it intriguing enough to merit his constant attention throughout the day to unravel its mysteries! He never calls, he never SMSes...just stares at it in deep admiration and occasionally pokes fingers at its curvaceous keys provocatively. I'm reminded of a similar behavioral pattern when I had bought my Nokia 6681 around a year back. How time flies!