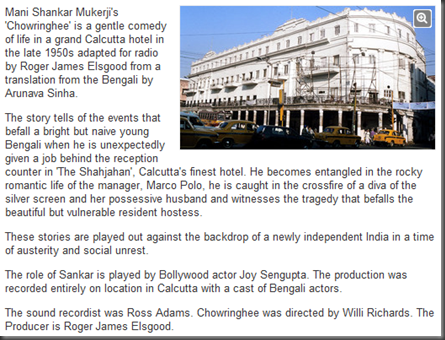 My radio is almost always tuned to ClassicFM. I decided to switch to BBC Radio 3 tonight and was pleasantly surprised by what lied in store for me- a radio adaption of a play set in Calcutta of the late 1950’s.

Though I was in the mood for music, I did follow the play for half its duration. The one aural flaw I managed to detect in the adaptation was the faintly and oft playing Flamenco Sketches. I remember the track vividly since it’s my all-time favorite jazz composition by Miles Davis. The album Kind of Blue was released in August, 1959. Now, if the drama is set in the late 1950’s, it’s highly unlikely that the track should be playing anywhere within the premises of the hotel where it is set.

But I don’t need to be too critical to enjoy a good play. I enjoyed Chowringhee for 45mins and then ran out of patience before it could finish.

Asha is preparing dosa and I feel famished.