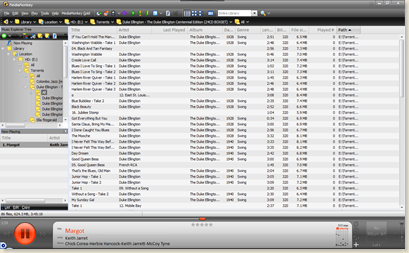 Being a music junkie, I've tried quite a few audio players in the past few months. Each has its own strengths and weaknesses.

I never tried iTunes. It's worthless if you don't have an iPod and have no intention of buying music from iTunes Store. It probably has the worst reputation for being a PC resource hog.

Enter the best audio player: MediaMonkey. It has an amazingly powerful interface and yet remains simple enough not to intimidate the average user. Best of all, it allows you to browse through your archive natively (original directory hierarchy). So you don't need to create playlists (I HATE them) if your file hierarchy is intuitive enough. Review sites all over the web have sung songs on praise of MediaMonkey and I can see why. My only gripe is that its support for audio streaming is almost non-existent. Thankfully, I still have Real.

I also tried the G-string of all music players today: foobar2000. It's so cute!

saurabh said…
WMP11 is still the best I think, both in terms of looks and the sound it renders. Add to that a DFX plugin, Soundblaster Audigy and Creative 5200 speaker system and you know what i am talking about. And its true not just for loud music.
For video playback, try GOM Player. Very simple user interface, low memory/cpu usage and plays all file types you can come across.
Monday, May 05, 2008 5:10:00 PM

Deepanjan said…
You've got a point. However, Soundblaster and Creative are not player specific. DFX plugin isn't all that effective or appealing.

If accurate reproduction of sound is desired, the audio player hardly has a say. It's the acoustic system that makes all the difference.