Even a clock that's broken is right twice a day 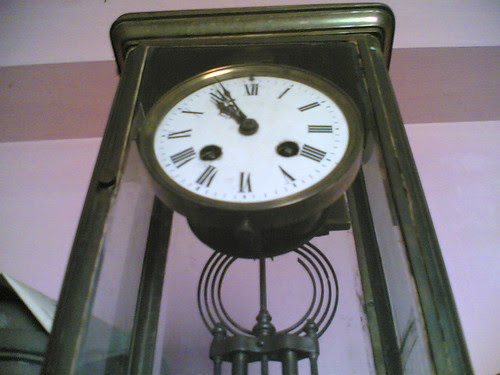 I just saw this Woody Allen movie where the great atheist recalls the adage of even a broken clock being right twice a day.

We were taught how to tell the time in first grade. Before the face of the clock could be deciphered, however, I was already smitten by the timekeeper to our dwelling - a vintage, English-made, pendulum clock. Dad would wind it every Sunday at 9pm without fail. And since the object of my affection was so stunningly beautiful and untouched by time, I decided to draw the face with the arms pointing to any direction that caught my fancy.

I remember how agog I was when it was over. I showed by artwork to Dad and asked what the time was, which I obviously don't remember now. What if the smaller arm pointed to somewhere between 8 and 9 and the longer North? Was it 8, 8:30 or 9?

And this is where the adage is potentially defeated. Some out-of-sync clocks can be synchronized by manually rotating the arms. Anyone with an iota of common sense would do the job by rotating only the longer arm (at least for mechanical clocks), the shorter one would lazily follow - though very slowly. Disobey this rule-of-thumb and you're a clock killer and the adage refuter.

As Dad had feared, I wasn't by his side when his time finally came years later. I reached home late, very late. The clock had missed the customary Sunday winding but it was still keeping time when I finally reached home on Thursday morning...as if waiting for me.

Dad had been witness to someone resetting the time on my maternal grandfather's clock by rotating the smaller arm. He went on to time and again recall the incident and ridicule the person involved, which was very unlike him. After Dad passed away, someone tried to reset our pendulum clock this way. Obviously, not everyone in Dad's proximity during his lifetime could assimilate his insight. When I learnt of the folly, I couldn't help an outburst as tears flooded my eyes thinking of Dad.

I'm away from my clock for now, but one day I'll take over the mantle. That's when the pendulum will swing again.