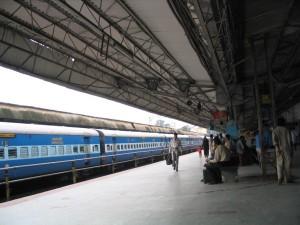 Being an unearthly hour (12:45am), many of the passengers had nowhere to go. Unfortunately for me, none of my new acquaintances were so helpless...& that left me stranded in the waiting room surrounded by strangers.
Well, the only way of killing time was to try & admire the Jemima lookalike , who, I saw, was also in the waiting room, accompanied by 2 more girls & 2 elderly people. Trying to sleep proved futile, even though some folks showed remarkable innovation in setting up makeshift mattresses & getting a good night's sleep. Some were even snoring! I wasn't so lucky.
Jemima lookalike & company left @ around 7am while I decided to search for a hotel @ 9:30am. No sooner had I left the station than a bunch of auto drivers ganged me & asked for my destination. Being quickly intimidated, I asked if I could be taken to an inexpensive hotel. The folks quickly jumped at the opportunity to exploit a new like me. One of them had the privilege of taking me for a ride (literally & metaphorically) & took me to a nearby hotel. No luck. Apparently, the engg. candidates had occupied most of the hotels in town. Our next stop (Classic Guest House) proved to be more useful.
BTW, the autorickshaw driver asked for 40bucks for his service, even though the destination was only a stone's throw away from the station. But that was to be expected!