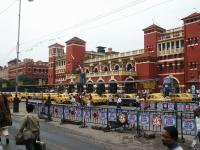 Dida had come in the afternoon while choto mama came in the evening.
Didi & Diya also came in the evening. I was getting restless as the Net had failed to give me any good news regarding my reservation status for either of my tickets. In desperation, I dialed 139 for the status enquiry. I heaved a sigh of relief as the SL berth was finally confirmed. A few moments later, the 2A birth followed suit.
Meanwhile, Bua da had also come for a visit. He offered me some vital advice...advice Dad would have preached had he been there. Diya was her usual lively self and went about with her antics. I had played Tchaikovsky and Chopin on my CD player as it would most certainly not be used for a long while. All sorts of things were being dumped into my bag & suitcase till they could sustain no more. Still, the relentless stuffing continued. 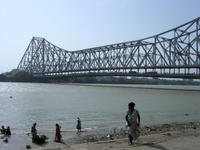 Shilu pishi also came for a visit. Last minute activity kept me as busy as a bee till I finally had the luxury of listening to what they had to say.
Had dinner @ 9 & then took a bath. All set, mama & I walked our way to a waiting cab, boarded it & headed for Howrah station. The trip us less than an hour & relieved me of Rs.140. It was just 11pm & my train was due to arrive only @ 3:30AM. We had no choice but to wait. Mama made the mistake of lighting a cigarette...and was promptly fined Rs.200, a bill that I had to foot. 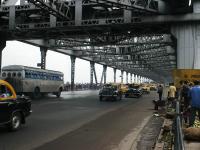 This was followed by my frantic & near-futile attempt to get my SL ticket cancelled. I was in for some rude shocks. I learnt that different sections of the reservation counters catered to different sections of the railway. This made me shuttle like a cork between the old & new stations for the cancellation. Nearly all the counters were vacant, which was OK since the hour was odd. Those that were open would/could offer little help. None of these folks were willing to render any guidance. To make matters worse, these was no reservation found to be found anywhere! After trying for over half-an-hour to procure the form and failing, I asked one of the folks manning a counter if a plain paper would suffice...to which the moron firmly answered in the negative
I won't go into the details but my merciful pleas did finally find a fellow who took pity on my plight. He asked an attendant to look into my matter. That done, my ticket of Rs.503 was cancelled and I was returned Rs.251. My honor restored, I beat a hasty retreat to my mama's side.

December 26, 2006
The workday didn't have the sweetest of starts. After being made to wait for almost half-an-hour for breakfast in the cafeteria, I was told only when I enquired that there could be no omelette since the heater wasn't working properly. I lost my temper and aired my annoyance not because the heater was out-of-order but because I was needlessly made to wait for something that was just not about to happen. The onus was on them to intimate me and they failed to own up to their responsibility. I find this attitude very irksome. Anyway, the rest of the day was smooth sailing except for a minor glitch that had to be rectified just when I was about to head for lunch. The bay was mostly deserted since most of my colleagues had volunteered for a training. I'm self-taught...thus my being an exception to the mass exodus! Nilotpal is on a fortnight-long leave and I missed him dearly today.
Post a Comment
Read more