The way to protest in India 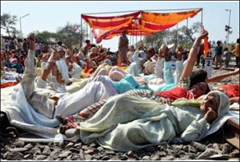 You think being backward is not a good thing? This community is fighting to be labeled backward so as to gain reservation benefits!
On one hand, we are supposedly fighting caste-based discrimination. On the other, we are fighting to be called backward! This is India.
The protests have led to a complete disruption of railway services in Northern India. The Jats are now threatening to turn the standoff more violent if their demands are not met. The government, true to its tradition, remains a mute spectator. It’ll try every possible effort to appease as many people just to remain in power.