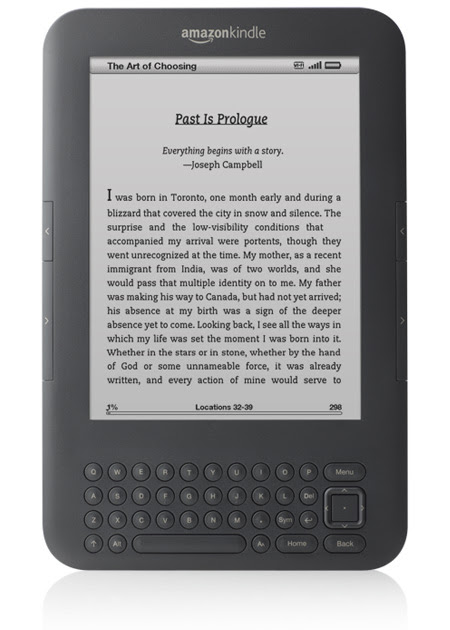 Which is worse: being spoilt for choice or having no choice?

I have been in a dilemma for some time regarding buying an ebook reader, the Amazon Kindle, to be more precise. But then, the exponentially dropping price eggs me each time to wait just a little more. Technological improvements have been another wait-maker, the crucial divide being of a certain chromatic character. You see, I love color thought I have a fetish for black.

Years ago, when Dad was about to buy our very first TV set, he gave us the choice between a 21” B&W TV and a 14” Color TV. The womenfolk ganged up against me and settled for B&W. It made no sense to me at all and I would have been up in arms had I had access to them. The loss of screen width could be compensated for by sitting closer to the set, I reasoned. Want it bigger? Sit nearer! Want it bigger still? Keep nearing the screen until the tip of your nose touches the screen and electrostatic sparks fly. Simple! Well, 1 is less than 2 and Dad knew his counting. We bought the B&W set and life lost its color for me.

History is repeating itself, if only in a certain warped way. Ebook readers are all the rage, yet they are woefully colorless. But the winds of change are blowing with fury. This article points to a future of colorful reading, if only tentatively. It’s only but natural for the transition to occur sooner or later, but what’s natural for the layman is often a serious technological hurdle for the scientist, as folks at Amazon and EInk would concur.

But why do I have such a heightened interest in the Kindle? Well, books in the West are often so excruciatingly expensive that I often have the urge to send all the publishers to the gallows. The Internet, may its bandwidth increase, has come to the rescue of the hapless reader. You’ll often find inexpensive and sometimes even free content off the web, a great alternative to the old-world publishers. Not only does the Kindle make reading more portable, its 3G version even allows free Internet access in 100+ countries, though the experimental browser is very crude and…colorless for now. It’s tempting to read some of my course material on the Kindle, but then it’s tempting even more to hold on and wait just a little longer for color to appear. My trusty Andromeda should suffice until then.

And who can forget iPad or the rumored Android-powered tablet? Damn, I’m spoilt again!