I fell in love with computers solely because of operating systems. To me, operating systems are the only reasons why computers ought to exist! DOS, in those early days, was exquisitely simple and simply exquisite. The OS was actually tiny enough to fit into a floppy disk…unimaginable by today’s standards, 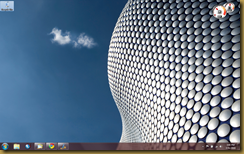 Years later, when Andromeda was ushered into my life, operating systems had changed dimension altogether. So bloated was Windows Vista that I never dared to share hard-disk space with any other OS. Of course, the operating system had become a lot prettier, what with fancy things like a Desktop and a Control Panel. Still, my passion was on the wane.

All this lasted 3 years. That’s when I stumbled across something on the OCW from MIT and though of giving the native tongue of C a spin for a change. One thing let to another and I finally mustered the courage a seat the up-and-coming Ubuntu 10.04 on Andromeda. That’s when all hell broke loose, not because the OS was at fault but because I soon got addicted to resizing partition tables, installing GRUB and corrupting the disk in the process!! Ah, this was familiar territory, at least the chaos!!! 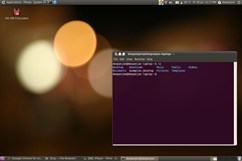 Believe it or not, I have been on such a potent overdrive configuring and reconfiguring my system that I must have installed operating systems on Andromeda at least 10 times in as many days. Along the way, I even jettisoned Windows Vista for Windows 7.

What’s my take on Linux? It may be a good OS for servers, but it’s still got a long way to go (if at all it goes anywhere) before it can be taken seriously. Fine, Google and Amazon do run on Linux, but the Linux market still remains overwhelmingly minuscule compared to Windows. GNOME and KDE are atrocious desktop environments, device support is poor, applications are virtually non-existent, too many distros kill any chance of a semblance of uniformity and a lack of corporate push is the final nail on the Linux coffin. The IDC report confirms the poor sales figures for Linux servers.

Still, Linux is not entirely worthless. It’s of great academic interest, 91% of the fastest supercomputers run on it, embedded systems make good of it and its manifestations in the form of Android OS and Chrome OS bodes well for its future. To be honest, I actually feel sorry for it but see hope in Google backing its development in a big way.

I’m hoping to get to know the open-source OS a little better in the months and years to come.

Anonymous said…
Try hackintosh
or get a imac

you will love it