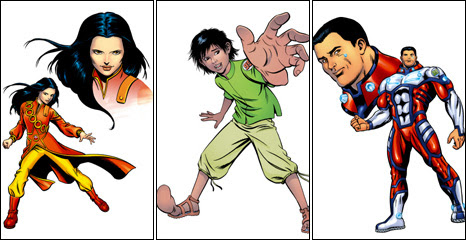 Was Spiderman a Christian? Or Batman a Buddhist? Barring the ‘real’ men behind the masks, I’m not really sure - their religious identities were never enforced or projected while fighting crime. Tarzan may actually be an atheist since he was reared mostly away from civilization. The animals that raised him hopefully didn’t corrupt him with religious propaganda.

Why then does Islam need an ad-hoc team of 99 super heroes to teach the world of its tolerant and peaceful nature? Why did the gorgeous Queen Rania of Jordan have to launch her own YouTube channel towards the same end? Why do pacifists have to constantly plead with the world to believe that Islam indeed teaches love and respect for all human beings?

Because reality starkly points to the contrary. Islamic militancy is a global menace today and much of the civilized world is reeling under its tyranny. Sharia law is deeply regressive and curbs all forms of personal liberty. Women are treated like dirt and flogged for venturing out without being accompanied by a close male relative. People accused of adultery are stoned to death. Public executions are commonplace. Minor offenders could be sentenced to their limbs being amputated. Homosexuality is a crime punishable by death. The Quran instigates its followers to wage a war against those who do not believe in Allah. It asks the fight to last until the only religion is that of Allah. It champions jihad to the point of self-annihilation. Those who attain ‘martyrdom’ in the name of Allah are promised unending sexual gratification in heaven while the non-believers are condemned to burn in eternal hell.

The verdict is clear. Islam preaches hate, intolerance and subjugation. There is no room in the modern world for such hate mongering. As long as Islam lasts, feeble but desperate attempts to justify its ‘teachings’ will continue, but all in vain.

Zoya said…
Very well put! Our incessant striving for political correctness means no one ever says it like it is. It's great to read such a candid opinion that makes so much sense!
Friday, July 03, 2009 9:13:00 PM