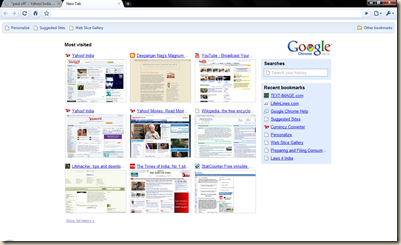 I was always suspicious of Zonealarm Forcefield for the problems I was facing in installing Google Chrome. By now, I must have made more than 50 attempts at the installation! I was also getting increasingly frustrated with the buggy nature of Forcefield causing Firefox (and less often, Internet Explorer) to act really weird. Though the idea behind Forcefield is fantastic, it apparently has serious shortcomings. In spite of all the troubles, however, I wasn’t willing to let go of it, especially since it was a paid-product that I got for free.

Today, I had enough of Firefox launching in yet another avatar. I promptly uninstalled Forcefield and immediately gave Chrome a try. It worked flawlessly! I played with the new browser long enough and found it rock solid – no crash or misbehavior till now. It’s definitely fast and the spartan interface will entice the minimalist. Good for us.

Proud to say this about browsers for Windows - I’ve tried them all!

Anonymous said…
it's funny, the more i use Chrome (for windows), the more unstable it seems to get... crashes a lot more, can't handle sites with flash, hangs every time i close a tab... all that to say, i'm switching back to Firefox
Sunday, September 21, 2008 12:29:00 AM

Deepanjan said…
My experience has been very much the contrary. I've been using Chrome full time for the past couple of days and never did it misbehave. Flash sites (including YouTube) work flawlessly and opening/closing tabs has never been an issue.
Firefox, though, remains my firm favorite for now!
Sunday, September 21, 2008 7:10:00 AM