Arecibo Radio Telescope, Puerto Rico
When I was a child (& long before I became aware of my abysmally poor IQ), I used to fantasize buying this telescope (the world's largest single dish radio telescope). That way, Dad & I could research outer space to our heart's content! However, since the dish was placed on the mouth of an extinct volcano, I was sometimes a bit uneasy about the idea. What if the volcano suddenly erupted? I had read about the telescope in Ian Ridpath's Hamlyn Encyclopedia of Space. The two pages covering the telescope were yellowed by overexposure to daylight! What I liked most about radio telescopes was that they could be used even during daytime and in all weather conditions (unlike their optical cousins), so we wouldn't have to waste time even if meteorological forces played havoc or the Sun shone brightly on us!
Alas, Arecibo was never up for sale and I never became a professional astronomer! But Astronomy still remains my first love. I'll be an amateur Astronomer someday.
So stay tuned to these pages! 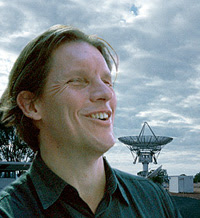 Kent Cullers
Cullers is a blind astronomer who works for the SETI project, amongst other things.
So what's his Arecibo connection? Well, the Arecibo telescope is responsible for the world famous SETI@Home project. I had learnt about Cullers when Dad had read a newspaper article on him ( I couldn't read Bengali...and still can't!).
BTW, I was pleasantly surprised to learn recently that Cullers was depicted as the fictional character Kent Clark in the movie Contact, written by Carl Sagan. Contact was a great movie. Sagan's famous TV series Cosmos was also highly relishing.

Anonymous said…
What books have you read on Cosmology? Most of Carl's works are worth a read, specially Cosmos and Broca's Brain.
I also like John Gribbin's work "In search of the Big Bang".
Do you have a copy of "The fist three minutes" by Weinberger?
Monday, May 30, 2005 7:52:00 AM

Deepanjan said…
Carl's books are indeed worth a read. My interests are more skewed towards astronomy than cosmology. The First 3 minutes is a book I'm looking for. Even Hawking's A Brief History of Time makes a favourable allusion to it.
Monday, May 30, 2005 2:43:00 PM